Megalobox returns for the true fans

If you don’t know Megalobox , you should open a new tab on your browser immediately and search for a stream to watch because you definitely missed out or cop the new Blue Ray Disc Set.

Yes, Megalobox has what’s considered a very typical shonen action manga storyline these days, with a hero character fighting through multiple villains, rivals, and competitors on his way to some ultimate goal, but what makes Megalobox work so well is the intense “do or die” theme running throughout that is both physical and spiritual. 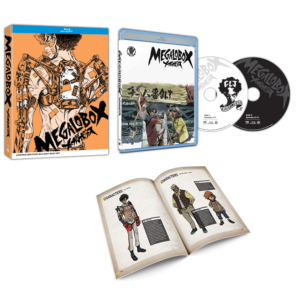 In Megalobox, Junk Dog’s fight is not just about not losing to an opponent, but about not losing himself. To rise above having an aimless life and stepping back from the brink of internal nothingness. Usually boxing stories deal with a sympathetic, “loser” underdog attempting to prove their worth, but Megalobox is about finding that worth to begin with. And yes, there are many rad fights and cool action set-ups along the way, but Junk Dog’s trophy at the end is tied into him discovering a reason for existing and for getting up off the couch just as much as him “wanting to win.” And that story is laid out beautifully over the two discs.

But with all those features, we must be nearing the end of the content, right? NOPE, as inside the box you’ll also find a 128 page booklet filled with episode synopses, character and world location descriptions, production art, interviews with various members of the staff and even an essay derived from a conversation with Tetsuya Chiba, the illustrator of Ashita no Joe. It’s a truly stunning amount of content, and it’s emblematic of the time and care that it took for VIZ and TMS to produce this. Another bonus: I have no trouble fitting the disc case and the book back into the sleeve. I know that this doesn’t seem like a huge concern, but if you collect enough special Blu Ray sets, you’ll often find yourself saying “Well, the poster/booklet doesn’t HAVE to go back into the box…” and just leaving it in sad pieces.

Peter Grill and the Philosopher's Time get's an anime adaptation. But, is it safe?