Scientists at the Universities of Birmingham, Bristol, and Colorado, Boulder have moved a step closer to developing the next generation of data storage and processing devices, using an emerging science called skyrmionics. 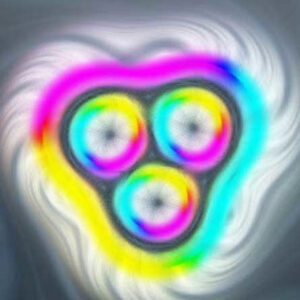 Simulations of skyrmion bags in magnetic materials. Each point represents a direction of the magnet, with white upwards, black downwards and colours around a colour wheel. The bags consist of three vortex-like lumps, which are the skyrmions inside the bag.

Skyrmionics focuses on harnessing the properties of nanometer-sized structures in magnetic films called skyrmions. These spin on the surface of the magnet like tiny vortices and scientists believe they could be used to store much denser quantities of data that is currently possible using existing magnetic data storage techniques on which modern computers currently rely.

The shape of these skyrmion structures means data encoded in them could also be transferred using much less power than is currently achievable.

But arranging these new structures in a way that makes them capable of storing and transferring data has proved a challenge.

In a new study, published in Nature Physics, the research team of UK-based theorists and US-based experimentalists has demonstrated a way of combining multiple skyrmions together in structures they call ‘skyrmion bags’, which allows a far greater packing of information in skyrmion systems.

“The challenge of improving our data storage is becoming increasingly urgent,” explains Mark Dennis, Professor of Theoretical Physics at the University of Birmingham and lead author of the study. “We will need new technological approaches to increase the amount of data we want to store in our computers, phones, and other devices, and skyrmion bags might be a route to this. Rather than using trains of single skyrmions to encode binary bits, each skyrmion bag can hold any number of skyrmions, massively increasing the potential for data storage.”

The team has modeled their technique in magnetic devices using computer simulations and successfully tested it in experiments involving liquid crystals.

“It’s particularly exciting to see this technology at work in liquid crystal since it opens up new possibilities for advances in areas such as display screens, sensors or even solar cells,” adds co-lead author, Dr. David Foster, at the University of Bristol.

Skyrmions were originally proposed as a theoretical model of fundamental particles by Professor Tony Skyrme of the University of Birmingham in the 1960s. This research, funded by the Leverhulme Trust and the US Department of Energy, demonstrates how purely theoretical ideas in physics can lead to innovative new technologies.

In February, the University of Birmingham secured funding from the Engineering and Physical Sciences Research Council (EPSRC) for a new multimillion-pound EPSRC Centre for Doctoral Training in Topological Design at the University of Birmingham. The center is expected to train students, in collaboration with industrial partners, to deliver breakthroughs in the shape-related structures leading to new technologies such as skyrmionics.

Will Snapchat announce a new gaming platform in April?

What will be Sony's PlayStation 4 Successor