The Prodigy cancels all shows after loss Keith Flints

“Following the tragic death of Keith Flint all forthcoming Prodigy shows will be cancelled with immediate effect,” the band wrote on Twitter.

Keith Flint, 49, was found dead at his home . Police were called to his home in North End, Essex March 4th and remain at the address. His former bandmates issued a heartbroken statement, confirming the death of the “true pioneer, innovator and legend”. The statement said: 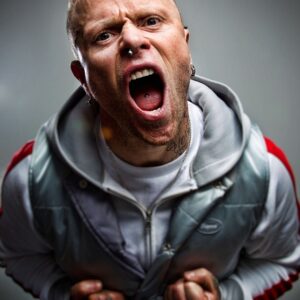 “It is with deepest shock and sadness that we can confirm the death of our brother and best friend
Keith Flint. A true pioneer, innovator and legend. He will be forever missed. We thank you for respecting the privacy of all concerned at this time.”

Musician Keith Flint was the dancer and later vocalist for The Prodigy, with his best-known works including Firestarter and Breathe. Flint originally started as The Prodigy’s dancer but featured as a vocalist on hit single Firestarter in 1996. The same year, he also starred as a vocalist on the next single Breathe – performing lead vocals. Following the success of these two tracks, Flint contributed to more and more – with the 1997 album The Fat of The Land featuring his voice on four songs. The Prodigy became one of the UK’s biggest bands but Keith once revealed the band was put in jeopardy following his drink and drug abuse. Speaking about a period n the early 2000’s, in which The Prodigy were suffering from a lack of new material and so were not performing live, he said: “It was a dark period. I was drinking and taking too many drugs.

As well as his work with The Prodigy, Keith Flint also carried out a number of solo projects including the bands Flint and Clever Brains Frying’. He also had success in the motorsports industry, both as a motorcycle racing team owner and manager. Flint’s Team Traction Control won three Isle of Man TT races in 2015. A keen motorcyclist himself, in 2007 Flint rode 1,500 miles from Britain to Spain to attend the Spanish motorcycle grand Prix. He also races in competitions and is known to have ridden alongside Lee Thompson, from band Madness.

In his personal life, Keith Flint dated TV presenter Gail Porter with the couple being dubbed the Beauty and the Best for their differing appearances. The pair split in 2000 and Flint later married Mayumi Kai, a Japanese DJ. In an interview, he claimed his now wife helped save him from spiralling further – instead swapping alcohol and drugs for Range Rovers and dogs in his new, more relaxed life. But the marriage broke down and Mayumi Kai was in Japan when Keith was found dead on Monday. Keith was reported to be selling his home just days before completing suicide. Flint had recently returned to the UK from a tour of Australia and was due to start a US tour in May.

Tributes poured in for the frontman following the news, paying their respects to the vocalist. Broadcaster Jo Whiley tweeted: “Oh this is sad news. The death of Keith Flint. Whenever our paths crossed he was an absolute sweetheart. Really lovely. Incredible iconic frontman with a soft centre.”
Ed Simons of The Chemical Brothers tweeted: “Oh gosh, so sad to hear about Keith Flint, he was always great fun to be around and very kind to Tom and I when we first started doing shows together.. great man.”
Devastated fans also paid their respects to the singer, who was known for his unique style, tattoos and piercings.
One fan posted on Instagram: “Keith you will be missed but never be forgotten and always be a true hero and inspiration, and for the other members keep yourself strong and support each other!” Another said: “Everywhere from Facebook to news to here and everywhere I look to read is full of Keith. “Heartbroken world today for us all but mainly the family and brothers of Keith. RIP to an absolute Legend.”